The Gone Flyin' website
A TURN OF THE TABLE
January 2001

I thought that it would be an interesting turn of the table to have fun putting the airplane on ice. Most of the winter I make my freight runs with concern about ice getting on the airplane.

In retrospect, the dare factor might have been higher than I realized at the time, for I have never returned to a frozen lake. In my defense though, it must be acknowledged that the past three winters have been poor for flying from unprepared surfaces. They were in fact drought years. The winters of 2000 and 2001 were "open winters" where the snow cover was thin, temporary, or nonexistent. Since then we have had more typical winters with regular snowfalls and a significant accumulation.

Grass airports are hard to maintain in a snowy winter because the turf is so easily damaged by the plow blade. Dundee had excellent soil, but I always thought we were pushing our luck if we plowed more than six times. To land a wheel plane on a snow covered lake is a dicey proposition; the depth and the density of the snow remain unkmown until the wheels are in it, and then it is too late. With an insulating blanket of snow on the lake, the thickness of the ice can vary significantly too. 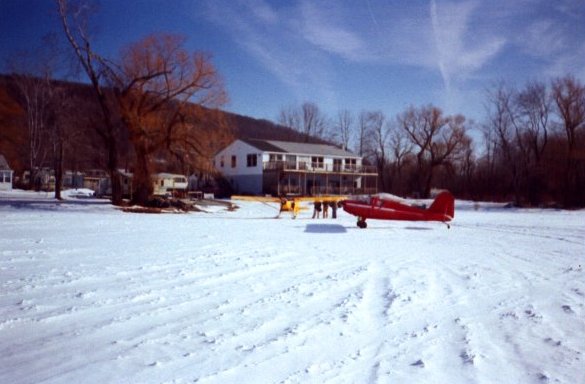 Larry's homebuilt Subaru Kitfox and my Commonwealth parked on the lake in front of the Waneeta Inn.

The same picture as above, but taken from the shore looking out. Ice fishermen are barely visible in the background.