The Gone Flyin' website
A CHANGE OF PACE
October, 1998

This story starts in 1989, but it was written nine years later, in 1998. The interesting part is that little tidbits continue to collect upon it. The first picture below is the picture that I took of Mike on the day that he made his first solo flight at Dundee Airport. He had already done a tour in the Army and was working a full time job through the wee hours of every morning. That was long ago, and in some respects he was still a kid.

It was really no secret that if the weather was any good at all, he would solo on his next lesson, and his parents had asked to be tipped off about it. They parked their car on a rise about a mile from the airport, and when they saw me get out and send Mike on his way, they drove down and parked under the cover of a hangar.

After three or four landings, Mike taxied in and I gave him the usual well- earned congratulations. I still remember the expression on his face when his folks walked around the corner of the hangar; it was sort of a mix of pride, surprise, and a bit of honor that his folks had come so far to watch him. His folks were proud, too... but they were also pleased that they had sprung such a surprise upon him.

It was just coincidence that I had the chance to take the second picture of Mike. It was a Saturday morning in 2002 when he was passing through the Elmira Airport in the Cessna Citation jet that he flew at the time. There was a wonderfully loose arrangement between the crew and the airplane's owners, and Mike was able to take his wife and baby along for this ride... I wouldn't have expected any less from somebody who was married in a hangar by a preacher who was also one of his flight instructors!

Mike and I cross paths in and out of Rochester from time to time, and we exchange a "hello" when we hear each other on the frequency. The last time I heard him, he was in a three- hole Challenger, approaching runway 22 from quite a distance. I was much closer, flying the Caravan on an approach for runway 28.

It was neck- and- neck as to who would arrive first, or if one of us would have to fly an extra wrinkle to break a tie. He landed first, but in his flash- an'- dazzle jet, he ended up in the far corner of the airport by the time he stopped. I had a shorter landing roll on a more convenient runway and taxied in front of him en route to my parking spot.

I thought as we passed "Aye Laddie, 'tis been a long road frum Dun-dee", but my parting words were a less emotional and somewhat taunting "slow and steady wins the race". 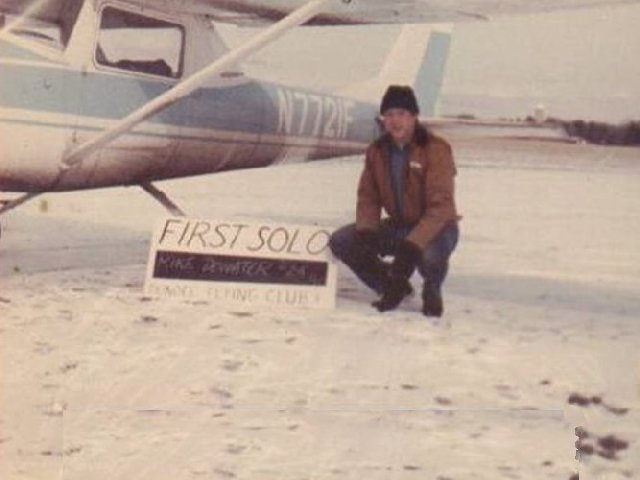 Mike, after making his first solo flight in early 1990 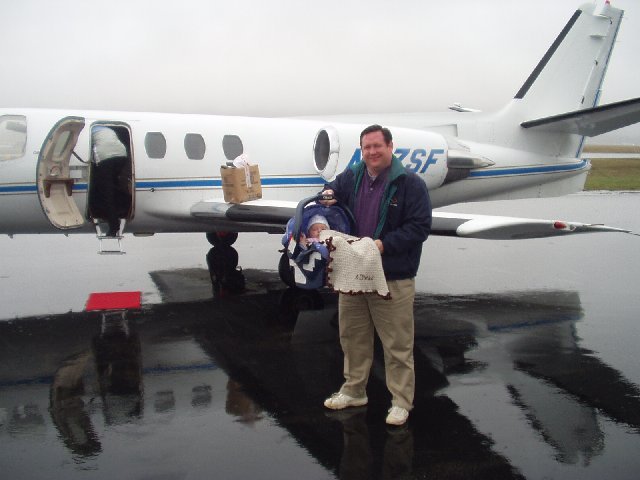 Twelve years later, on an impromptu "take your daughter to work" day.
use your back button to return to the Table of Contents
Table of Contents
Return to Website Home Page
E- mail Bob Tilden
Order your copy of Gone Flyin'